By: admin@internetnews.press
In: World
With: 0 Comments 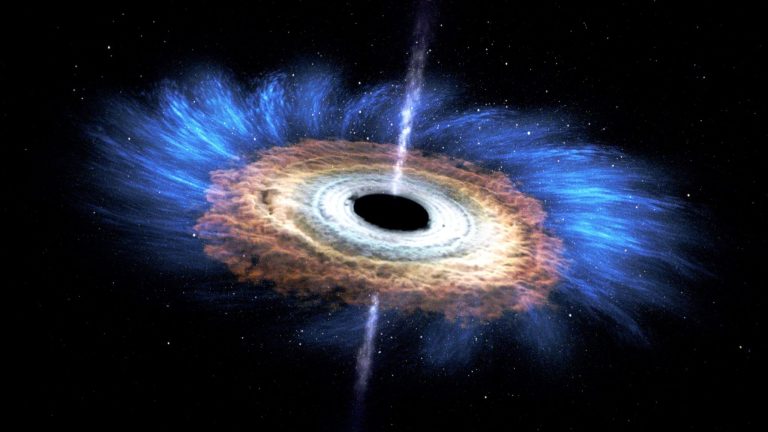 The world’s first picture of a black hole captured imaginations around the globe. Now comes the next challenge for scientists: taking better, sharper photos, in hopes that they will be able to test Einstein’s Theory of General Relativity. To get there, they want two or three satellites orbiting the planet looking for black holes.

The scientists are calling their creation the Event Horizon Imager (EHI).

“There are lots of advantages to using satellites instead of permanent radio telescopes on Earth, as with the Event Horizon Telescope (EHT) [the consortium that captured the first image of a black hole],” says Freek Roelofs, a Ph.D. candidate at Radboud University and the lead author of the article proposing the idea, in a press statement.

“In space, you can make observations at higher radio frequencies, because from Earth these are filtered out by the atmosphere,” Roelofs says. “The distances between the telescopes in space are also larger. This allows us to take a big step forward. We would be able to take images with a resolution more than five times what is possible with the EHT.”

While the original black hole photos proved, as radio satellites had done years prior, that black holes exist, scientists are eager to dive into the details. Even the smallest unexpected discovery could have cosmic repercussions.

“The fact that the satellites are moving round the Earth makes for considerable advantages,” Radio Astronomy Professor Heino Falcke says in the statement. “With them, you can take near perfect images to see the real details of black holes. If small deviations from Einstein’s theory occur, we should be able to see them.”

Of course, it took years of work and collaboration across the globe to capture the first image of a black hole. A second system of picture-taking will likely take a long time as well. “The simulations look promising from a scientific aspect, but there are difficulties to overcome at a technical level,” Roelofs says.

Scientists worked with the European Space Agency (ESA) t0 make sure the idea was possible.

“The concept demands that you must be able to ascertain the position and speed of the satellites very accurately,” according to Volodymyr Kudriashov, a researcher at the Radboud Radio Lab who also works at ESA/ESTEC. “But we really believe that the project is feasible.”

One of the biggest challenges could be sharing data between the satellites. “With the EHT, hard drives with data are transported to the processing centre by airplane,” Kudriashov says. “That’s of course not possible in space.”

That’s why the team is proposing a laser link, with data partially processed on board prior to continued study on the home world. It would be similar to the laser links used to monitor Earth-observing satellites used by the European Data Relay System.

“There are already laser links in space,” Kudriashov points out.

Scientists looking to build on the data from the EHT also say a hybrid system might work, with the orbiting telescopes joining the eight powerful telescopes on Earth that worked together for the iconic image.

“Using a hybrid like this could provide the possibility of creating moving images of a black hole, and you might be able to observe even more and also weaker sources,” Falcke says.

On Wednesday, astronomers revealed the first image ever taken of a black hole, bringing a dramatic conclusion to a decades-long effort. The iconic image offers humanity its first glimpse at the gas and debris that swirl around its event horizon, the point beyond which material disappears forever. A favorite object of science fiction has finally been made real on screen.

Their target was a nearby galaxy dubbed M87 and its supermassive black hole, which packs the mass of six and half billion suns. Despite its size, the black hole is so far from Earth – 53 million light-years – that capturing the image took a telescope the size of the planet.

This monumental accomplishment was only possible thanks to the Event Horizon Telescope (EHT). The image data was taken back in 2017 but scientists have spent two years piecing it together. That’s because EHT is made of up eight independent observatories that are scattered across the globe, cooperating together to act as one enormous detector. Shep Doeleman, director of the EHT, announced at today’s press event, “We are delighted to report to you today that we have seen what we thought was unseeable.” Researchers made their grand announcement simultaneously in seven different countries this morning, accompanied by a series of scientific papers published at the same time in The Astrophysical Journal Letters.

Black holes are so massive and dense, not even light can escape their pull. They’re often referred to as a singularity, or a point source, because they take up zero actual space. But this mysterious singularity is surrounded by the sphere of its event horizon. And anything that travels past it is doomed to fall into the black hole, with no hope of escape. That means the black hole itself is literally dark – it neither reflects nor gives off any light. So there’s nothing to photograph, no matter how advanced the technology. In the Event Horizon Telescope’s image, it simply appears as a central dark blob, or what astronomers often call the black hole’s “shadow.”